The Journey from Mulberry Street 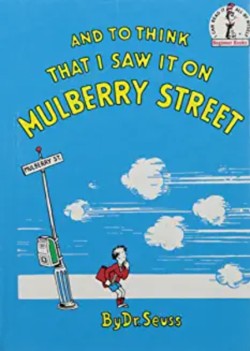 Some commentators have theorized—and I agree--that this is most likely, a distraction. Who would have imagined that the removal of six Dr. Seuss books could eclipse confirmation hearings, the For the People Act, the Equality Act, the Covid-19 Stimulus bill, and executive orders being signed in rapid succession?

Yet, is this more than a distraction?

We seem to have fallen prey to short-term memories. Take a stroll down memory lane for a moment. I am sure you remember the days when a parent who so much as complained about hundreds of f-words or porno-sex in kiddie books was accused of being a book censor on equal footing with a Nazi book burner. My goodness! That parent was charged with trying to control the thinking of all.

Some of Dr. Seuss’s books have been challenged, previously, including The Lorax and The Butter Battle Book—by ignorant, fascist parents, of course. After all, back in those days of long ago, only those kinds of people made complaints about books.

In this new era, six of Dr. Seuss’s books will no longer be published. Dr. Seuss Enterprises made this statement:

We are committed to action.  To that end, Dr. Seuss Enterprises, working with a panel of experts, including educators, reviewed our catalog of titles and made the decision last year to cease publication and licensing of the following titles:  And to Think That I Saw It on Mulberry Street, If I Ran the Zoo, McElligot’s Pool, On Beyond Zebra!, Scrambled Eggs Super!, and The Cat’s Quizzer.  These books portray people in ways that are hurtful and wrong.

The Adventures of Ook and Gluk, by Dav Pilkey of Captain Underpants fame, is also on the chopping block. Scholastic, the publisher of this 2010 book, says that it “perpetuates passive racism.”

Scholastic noted that the company has "removed the book from our websites, stopped fulfillment of any orders (domestically or abroad), contacted our retail partners to explain why this book is no longer available, and sought a return of all inventory."

Needless to say, Pilkey has apologized profusely for his use of “harmful racial stereotypes.”

"I wanted to take this opportunity to publicly apologize for this. It was and is wrong and harmful to my Asian readers, friends, and family, and to all Asian people," he wrote. . . . “I hope that you, my readers, will forgive me, and learn from my mistake that even unintentional and passive stereotypes and racism are harmful to everyone,” he wrote. “I apologize, and I pledge to do better.”

Wait a minute! This isn’t the first time Pilkey’s books have been questioned. The Captain Underpants series was the #1 most challenged book of 2012. The reasons cited by the American Library Association were “offensive language and unsuited for age group.” The “Top 100 Most Banned and Challenged Books: 2010-2019” list, posted on the website of the ALA Office for Intellectual Freedom, includes the Captain Underpants series at the #2 position.

How did Dav Pilkey respond in those days of yore?

“It’s pretty exciting to be on a list that frequently features Mark Twain, Harper Lee, and Maya Angelou,” said Pilkey. “But I worry that some parents might see this list and discourage their kids from reading `Captain Underpants,’ even though they have not had a chance to read the books themselves.”

Pilkey also stated that, “most of it boils down to the fact that not every book is right for every person. There are some adults out there who are not amused by the things that make most children laugh, and so they try to stomp these things out. We’ve all met people like that, haven’t we?”

In an interview with young adult author, Maureen Johnson, she addresses the censorship controversy surrounding her 2004 book, The Bermudez Triangle, which depicts a homosexual relationship between two girls:

I feel for the administrators and the librarians and teachers who have to deal with book banners and challengers. Book banners and challengers feel that they know what’s best for everyone (or, everyone else’s children). They’re so pleased with themselves and their standards, that they feel that they should be the community norm. I can’t even imagine having that much deluded chutzpah. I can’t imagine being that bored, either. Can you imagine going around your neighborhood with a piece of paper that says, “I went into the LIBRARY and found a BOOK with a DIRTY WORD in it, and now I want it LOCKED IN THE BASEMENT and GUARDED by a WOLVERINE so that THE PRECIOUS CHILDREN do not see the WORD. Please sign my petition.”

Johnson’s sentiments about book challengers were pretty typical in those days—way back in the distant past of 2009.

Scholastic withdrew A Birthday Cake for George Washington, by Ramin Ganeshram and illustrated by Vanessa Brantley-Newton. This 32-page book for children 7-10 was published by Scholastic in 2016. Facing criticism for “its portrayal of smiling slaves,” Scholastic responded:

“While we have great respect for the integrity and scholarship of the author, illustrator, and editor, we believe that, without more historical background on the evils of slavery than this book for younger children can provide, the book may give a false impression of the reality of the lives of slaves and therefore should be withdrawn.”

It is clear that the voices of these narrow-minded Pesky Prudish Parents are irrelevant. The Enlightened Erudite Elitists, however, know exactly what types of materials could potentially be harmful to the masses. They must intervene to protect us all.

In Chapter 4 of Between the Covers: What’s Inside a Children’s Book?, I demonstrated that “Social Justice” now trumps “Censorship.” Books by authors such as James Dashner and Sherman Alexie were now quietly being removed from library and bookstore shelves because of accusations of sexual harassment against them. After all, the #MeToo movement was in full swing. Obviously, this was not censorship because the Social Justice Card trumped the Censorship Card.

Yet, transgender young adult author, Meredith Russo—formerly known as Travis Stroud—was accused of repeatedly sexually assaulting and raping his wife. In October of 2015, an affidavit was filed that indicated Stroud could only see his child under the supervision of a relative, who was required to swear that the child would never be left unattended with Stroud.

It was “Travis Stroud” who filed for a marriage license with Jennifer Marie Russo in May of 2013, but later that year, Travis began living as “her true self.” By January of 2015, slightly more than a year after this, “Meredith Russo” received a six-figure advance from Flatiron Books (a division of Macmillan) to finish writing If I Was Your Girl. This young adult book cover sported a transgender model, the book had a transgender protagonist, and the book was written by a transgender. Russo’s book, If I Were Your Girl, was published in May of 2016, despite the earlier serious claims made by Stroud’s wife.

Do you ever feel like a ping-pong ball? The rules seem to change almost on a daily basis. Good is now evil, up is now down. No one knows from day to day who has a right to be offended and who does not.

If you have been following the news, even math is under fire. To insist that there be a correct answer to a math problem is now a sure sign of white supremacy.

Bella Dodd was a member of the Communist Party of the USA in the 1930s and 1940s. She later became an outspoken anti-Communist. In her 1954 book, School of Darkness, she wrote:

All I know as I look back to that time is that my mind had responded to Marxist conditioning. For it is a fact, true and terrible, that the Party establishes such authority over its members that it can swing their emotions now for and now against the same person or issue. It claims such sovereignty even over conscience as to dictate when it shall hate. [my emphasis]

Before 1935, for instance, the Party had preached hatred of John L. Lewis as a labor dictator. No stories about him were too vile. He was accused of murder and pillage in his march to power in the Miners Union. Suddenly, in 1936, Lewis became the hero of the Communist Party. 157

It’s been almost 70 years since Dodd penned those words. Her book was a warning that has seemingly been ignored.

Some of those in positions of authority are now armed with scissors, gleefully cutting up both the Bible and our Constitution.

If the foundations be destroyed, what can the righteous do? Psalm 11:3

[For further reading about Censorship, see Between the Covers: What’s Inside a Children’s Book? Chapters 4 and 15.]