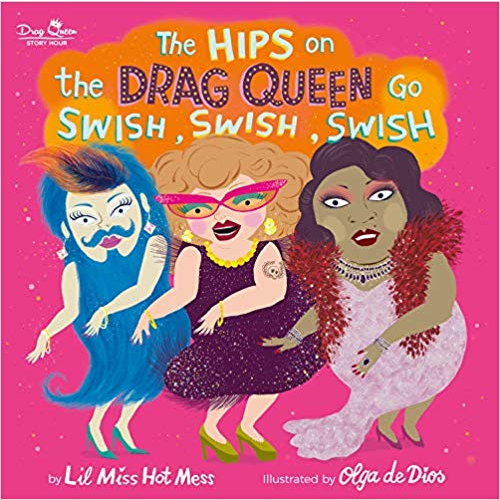 If I wrote an article about the future thrust of children’s books, many would call me crazy, unqualified, a doomsday self-appointed prophet, a fear monger and other adjectives I choose not to print here. Thanks to our dear friends at Amazon, however, it’s quite easy to see the future—at  least when it comes to books for children. These books are already available for pre-order so that purchasers can be on the cutting edge of the newest social constructs.

Forget those days in which some professors radicalized recent high school graduates when they arrived at the universities. This left some of our “human capital” marginalized, and since “equality of outcomes” is essential, it is only fair to start with the toddlers—all of them, if possible.

In light of this, today I will briefly show—thanks to our Amazon friends—three of these upcoming books that will help shape the worldviews of our children.

“Who wants to be a drag queen when they grow up?” asks Lil Miss Hot Mess during his performance at a New York library. The adults look more enamoured with Lil Miss Hot Mess than the children they drug with them.

The Hips on the Drag Queen Go Swish, Swish, Swish is a forty-page book for four- to eight-year-olds, that will become available on May 5, 2020.

. . . and then watch this one about Harris David Harris and his Lil Miss Hot Mess persona.

In this documentary, Harris explains just what being a drag queen is all about:

It’s as old as Shakespeare; it’s probably older than Shakespeare. So there’s the tradition of using it for subversion; to sort of upset gender roles, upset other social norms. So for me, it’s really a way of playing, of poking at the boundaries of things and it’s also just really fun. [my emphasis]

What parent wouldn’t want their children to aspire to these lofty ambitions?

Lil Miss Hot Mess was among the first queens to host Drag Queen Story Hour (DQSH) and is on the national advisory committee. (Amazon)

Let’s move on to the next book.

Be Amazing: A History of Pride, by Desmond Napoles, will be available for purchase on May 26, 2020. Desmond, of course, is Desmond is Amazing who performed in drag at a gay bar when he was just eleven years old. The author description on Amazon reads:

He is the founder of the Haus of Amazing, the first drag house for drag kids. Most importantly, he is an inspiration to many and a representation of hope for the future to come. Desmond’s motto is “be yourself, always.” He is the author of Be Amazing: A History of Pride.

This book is also forty pages with a target audience of three- to six- year-olds.The theme of this book is to teach these children as young as three that they can be free to be who they really are.

The Amazing Desmond, himself, is surrounded by his own role models. One such YouTube video shows Desmond with Michael Alig and Ernie Glam.

For those of you who have forgotten, Alig was imprisoned for over a decade for murdering his pusher, cutting the body up in his bathtub, and depositing the pieces in the Hudson. The book, Disco Bloodbath by James St. James, and the subsequent Party Monster movie with McCauley Caulkin tells the story about this Club Kid era in which Michael Alig and Ernie Glam both rose to either fame or infamy. This Club Kids group of drag queens were paraded on such shows as Phil Donahue, Joan Rivers, Geraldo, and Jerry Springer in the 1990s.

James St. James, a former Club Kid also, wrote a book for teens about a drag queen protagonist in 2007. In a 2010 interview with Cazwell on Gay Action News, St. James talks about his book:

My new book is called Freak Show.  It’s um, the first drag queen character in young adult history. I started getting a lot of e-mails from 14,15,16 year old little gay boys, little drag queens and, um, who sort of like glamorized what the Club kids were and what Michael Alig was about and everything and God bless them, God bless Michael Alig, God love the Club Kids, but it’s not something that I felt comfortable telling kids to go out and be drug addicts and things like that . . . so when DUTTON APPROACHED ME ABOUT DOING SOMETHING FOR TEENS I thought, well, this was a chance for me to do something that celebrated a, the things that Disco Bloodbath and all that stuff was about, ya know, personal empowerment and radical style and breaking boundaries and all that----being subversive and being rebellious, but not glamorizing the drug use and not glamorizing the murder and things like that…so it was a chance for me to do something for the CHILDREN . . . [my emphasis]

On the back inside flap of this drag queen bookcover, Dutton mentions that James St. James writes for the World of Wonder website. It won’t take the kiddies very long to navigate to the website or find the hundreds of St. James’s videos on YouTube. St. James’s Daily Freak Show episodes open the window so you can get a glimpse of just what this drag queen community really involves. All but the earliest episodes of Daily Freak Show advertise his Freak Show book for young adults. Notice that the microphone he holds has the letters W.O.W.—World of Wonder. After watching a few of these Freak Show episodes, ask yourself just who St. James's audience would be. After all, it is to this audience that his book for young adults is being plugged. Today, James St. James has a new program called Transformations, which can also be viewed on YouTube.

Go to YouTube and watch a few of these Daily Freak Show episodes. Then go to the World of Wonder website and enter James St. James in the search bar. Read a few of these articles to better understand the world your babies are being introduced to.

Whew! Now you have entered that same world in which Little Miss Hot Mess and Desmond is Amazing belong. This is the world in which the little children taken to the Drag Queen Story Hours by adults are being lured into. It’s not about the children learning to be themselves; it’s about expanding the numbers of their ever-widening community.

I’m Not a Girl, by Maddox Lyons and Jessica Verdi, is “coming out” on the twenty-sixth of May, 2020. This is also forty pages for children from three to six.

Maddox Lyons is a twelve-year-old transgender boy who lives in California with his parents, sister, two dogs, and two pet rats. He does advocacy and outreach with LGBTQ+ organizations. Maddox loves drawing and writing, acting, figure skating, and getting lost in a good book.

Lyons even has a website with a link to resources for both children and adults. The list of organizations cited are: Human Rights Campaign, GLAAD, PFLAG, GLSEN, Gender Spectrum, The Trevor Project, and Trans Youth Equality Foundation.

What do these three books have in common? Lil Miss Hot Mess is a drag queen, Desmond is Amazing is a child drag queen, and Maddox Lyons is a transgender child. These three books carry additional leverage with publishers, editors, and librarians because they are written by “authentic voices.” In a nutshell, books about LGBTQ+ people, or books about protagonists of particular backgrounds are now supposed to be written by people who identify as such. [For further discussion about Authentic Voices, read Chapter Thirteen of Between the Covers: What’s Inside a Children’s Book?]

I’ve always been rather curious as to why one has to dress in drag, or physically alter their bodies so “they can be free to be who they really are.”  I, along with many others, would be quite happy to see Little Miss Hot Mess, Desmond is Amazing, and Maddox Lyons, just be their authentic selves.