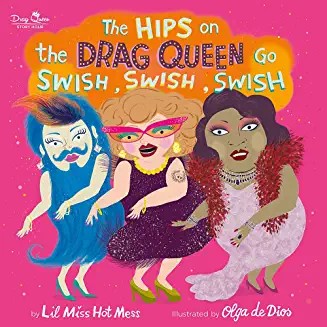 The Hips on the Drag Queen Go Swish, Swish, Swish, by Lil Miss Hot Mess, will be released on National Teacher Day, Tuesday, May 5th.

Elizabeth Bird, “the Collection Development Manager of the Evanston Public Library system and a former Materials Specialist for New York Public Library,” interviewed Lil Miss Hot Mess, author of The Hips on the Drag Queen Go Swish, Swish, Swish, and wrote a blog about it on the Fuse 8 Production site of the School Library Journal. It is noted that her opinions are her own and not necessarily a reflection of those of the School Library Journal.

“The Best Lil Hot Mess in Storytime” is an interesting title. It seemed to have a familiar ring to it. I Googled “The Best Little” and the first listing is The Best Little Whorehouse in Texas. Probably just a coincidence. . . Bird’s blog begins with:

How is a drunk adult audience similar to a storytime full of screaming toddlers? I’m sorry, are you telling me that there’s a difference?

Seriously, I’ve never figured out just why a mom would be inclined to pack up a diaper bag, bundle their toddlers up, strap them into their car seats, and drive to a library to have a stranger read a very short book with few words and many pictures to their children. The same amount of time and effort would be far better spent sitting and reading to one’s own children. It’s a special time for both the parent and the child, and also allows for important teaching moments when the child comments or asks questions. Reading before nap or bed time is also soothing and comforting to children.

As the blog continues, Bird writes, “I had a talk with the author, Lil Miss Hot Mess, to get the low down and dirty.” The title of her article, the screaming toddlers being compared to a drunken audience, and “the low down and dirty” seem out of place in an article about a new book for four- to eight-year olds.

My dear friend, talented author, and all-around genius Michelle Tea dreamed up the idea for Drag Queen Story Hour in 2015 as part of her queer literary and arts non-profit Radar Productions based in San Francisco. . . . Michelle was coming to town to tour her book Black Wave, she asked me if I’d do a reading at the Brooklyn Public Library.

Carley Moore interviewed Tea for an article that appeared on the Literary Hub in May of 2018. Tea gave her opinion about Trump voters and white people:

The only thing I have to say about Trump voters is they are racist, pure and simple, and misogynist, they are white people who want to preserve white supremacy. . . . White people are truly the worst.

Tea’s non-profit Radar Productions "is a Bay Area queer literary arts organization creating and supporting a community of queer artists through commissioning, developing and presenting ground-breaking literary work." Some of the funders listed on the Radar Productions website are the Horizons Foundation: fueling the LGBT Movement, Grants for the Arts from the San Francisco Hotel Tax Fund, The Queer Cultural Center, and the San Francisco Public Library.

In addition to her very adult books, Tea has also written a Drag Queen Story Hour book for four- to eight-year-olds, as well as a young adult trilogy. The Black Wave book that Tea was promoting in New York City and that Lil Miss Hot Mess referenced in the interview is an extremely graphic adult book:

On their second date Michelle petted the girl’s head as it hung out the window of a party, sending steams of barf onto the street below. When she was finished the pair found a closet in a bedroom and had sex, Linda’s forearms, tattooed with rockets, shooting into Michelle’s deep space. Eventually Michelle flipped Linda, working her hand inside the girl for about ten minutes before realizing she had passed out.

Michelle Tea, who writes this ilk of material, is the one who dreamed up the idea of a Drag Queen Story Hour. Today, there are more than 50 chapters in the USA and abroad.

In the interview, Lil Miss Hot Mess tells librarian Elizabeth Bird that “I was so thrilled to join drag friends like Persia, Honey Mahogany, Ona Louise, and Pickle in that early DQSH family."  Little Miss Hot Mess responds to another question from Elizabeth Bird:

[K]ids can be a tough audience!  So can drunk adults at a bar, and while the techniques are slightly different, in both cases you have to figure out how to use humor, excitement, and other gimmicks to hold their attention.

Kids . . . love things that sound silly or break the rules.  And drag can be excellent for that.

Bird states that Lil Miss Hot Mess’s book is “clearly . . . going to be a HUGE godsend to other drag queens doing storytimes . . .” Lil Miss Hot Mess follows up with advice for drag queens involved with the Drag Queen Story Hours to “be yourself.” An odd statement coming from a drag queen. He then tries to explain that “there’s always a kernel of truth.” LMHM expounds on the Drag Queen Storyteller training:

[W]ith DQSH we do trainings with librarians and educators on everything from read-aloud basics like when to pause to ask kids to respond, to how to answer tough questions raised by the books we read.

Do librarians and educators train non-drag queen persons how to read books to children? I don’t know the answer.

Bird suggests that non-drag queens can also use this book for storytimes and says that she is “completely ignoring the people who don’t like the book for nastier reasons.” Seemingly, she is suggesting that anyone who doesn’t think that the Drag Queen Story Hour is such a great idea for the very young, undoubtedly is malicious and not worthy of noting.

Lil Miss Hot Mess believes that the book will get the kids to “sing and move their bodies so they can get a taste of what it feels like to perform drag,” and states that those who see this as indoctrination just hate LGBTQ people. According to LMHM, educators can easily supplement the material in his book by talking about “Pride celebrations and LGBTQ histories.”

Of course, those caring drag queens are now “doing story hours online via livestream to keep kids engaged while they’re home from school.” I followed the hyperlink. The top March 20th link reads:

As we bring you more and more live stream events in the coming weeks, we hope you'll consider "tipping" our queens! As artists, storytellers, and nightlife performers, many in our DQSH fam are out of work right now! Every $5, $10, and $20 helps keep the lights on so we can continue to sparkle for you! And 100% of the funds raised through our GoFundMe go directly to DQSH storytellers.

Bird closes her blog with a hopeful statement about future books by Lil Miss Hot Mess. With promotional reviews and blogs by such noted reviewers as Elizabeth Bird, more of these types of books will surely follow.

Does anyone know when, how, and why libraries morphed into indoctrination and entertainment centers?