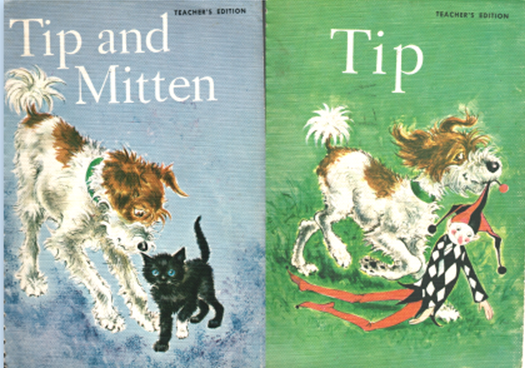 These two books are from the Reading for Meaning Series by Paul McKee. This series was first introduced in 1949 by the Houghton Mifflin Company. The books pictured were from the 1966 editions. There were 622 words in the Tip first pre-primer. Of those 622 words, there were only 20 different words used:

'Tip' is actually repeated 60 times in this pre-primer; 'here' and 'play' are repeated 49 and 47 times respectively. Why was it necessary to use so much repetition?

Since vowel-sound associations are comparatively unreliable and generally unnecessary clues to the identity of a strange printed word, these are introduced only in the second-grade materials at a time when pupils will already have a firm mastery of the basic word-attack technique. [Page 3, emphasis in the original]

Each of the vowels may stand for several different sounds or for no sound at all.  But you don’t need to know about the different vowel sounds now. If you use just the sounds the consonants stand for and the meanings of the other words, you will almost always be able to tell what a new word is when you meet it in your reading. [p. 20]

Pupils will learn that the sense of the context in which a word appears indicates the sound that the vowel in that word stands for . . . I have told you that you can usually tell what a new word is by using just the sounds the consonants stand for to help you think of a word that makes sense with the other words . . . [p. 32]

The rest of this teacher’s manual goes to great lengths to explain how to teach a child to read without teaching a child vowel sounds. One such method I will call leading. The teacher is scripted to keep asking questions and pointing the children to the picture of the dog’s tail until the student’s finally decide that the name of the dog (and the book) is Tip. 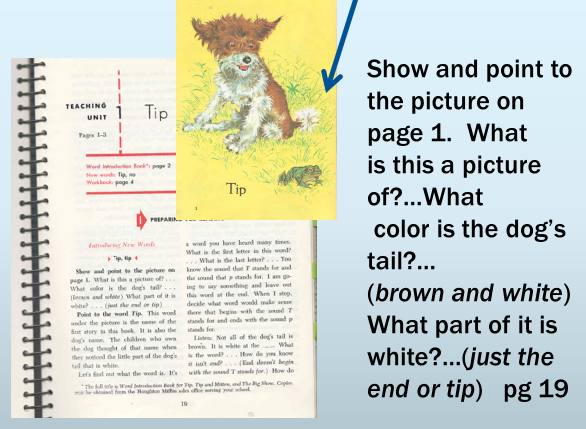 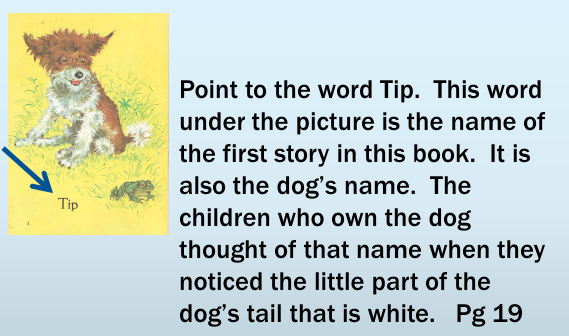 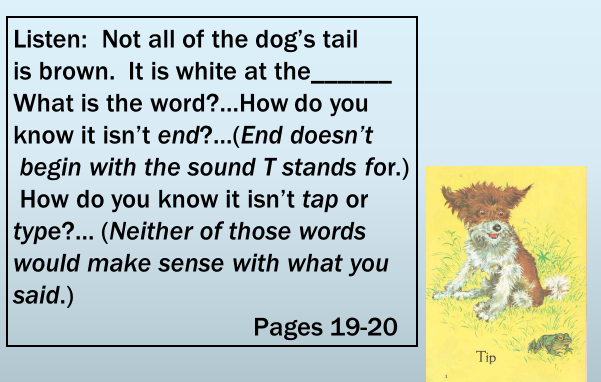 The teacher is also scripted to encourage the students to examine the pictures in the story carefully. Context—or what word makes sense in the sentence?—was also vital in figuring out a word.
To add insult to injury, the teacher, then tells the students:

Did you notice that you figured out these words by yourself? I didn’t have to tell you what they are. You have found out now that you can read printed words by using the sounds you know the consonants stand for to help you think of a word that makes sense with the other words. [pp. 20-21]

Repetition, pictures, context, and leading were certainly the way to teach reading when any hint of teaching vowel sounds was off-limits, but there was still one missing element. That, of course, was the use of a controlled vocabulary. Read more about this in Chapter Two of Between the Covers: What’s Inside a Children’s Book?