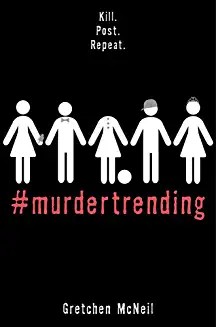 Murdertrending, by Gretchen McNeil, is listed at Number One on the YALSA 2019 Teens’ Top Ten. The Young Adult Library Services Association (YALSA) is a division of the American Library Association. The book is also listed as a 2019 YALSA Top Ten Quick Picks for Reluctant Young Readers, an International Literacy Association Young Adults’ Choices 2019 Reading List, an Official Junior Library Guild Selection for Fall 2018, a Barnes & Noble Best Books of 2018, a Brightly Teen: 18 of the Most Exciting YA Books to Read in 2018, a Goodreads: Most Popular Books Published in August 2018, a Seventeen Magazine: The 20 Best Books of 2018, a Refinery 29: The Ultimate YA Beach Reads of 2018, an EpicReads: The 18 Most Anticipated YA Books to Read in August 2018, and a Hypable: The August 2018 YA book releases that need to be on your to-read list.

Murdertrending, published by Freeform, was published August 7, 2018. Freeform is an imprint of Disney Publishing Worldwide.

With the numerous accolades bestowed upon this book, I think it is safe to say that this  isn’t a hard-to-find book for readers eagerly awaiting another of McNeil’s horror and suspense-filled thrillers.

This one isn’t really much of a cliffhanger, as even a not-so-perceptive young reader can probably pick up on the not-so-subtle foreshadowing on pages ten and eleven:

Alcatraz 2.0 . . . where convicted murderers were hunted down by government-sanctioned serial killers for America’s amusement, had been the brainchild of an anonymous television mogul known only as The Postman. When a former reality “star” was elected president of the United States, The Postman had used his clout to sell the federal government on the idea of capital punishment as entertainment. Broadcasting the over-the-top theatrics of The Postman’s psychotic killers—each with their own thematic brand of murder—not only reminded citizens of what awaited them if they broke the law, but kept them glued to their screens, where they were less likely to break said laws in the first place. (10)

The Postman’s killers were media-driven celebrities, just like the president . . . (11)

The killings are methodically orchestrated by the assassins. McNeil leaves nothing to the imagination:

Her body twitched once, her eyes wide and dilated, and then went limp as her head was severed at the neck and catapulted through the air like a popped champagne cork. (104)

As the book progresses, the reader learns that the Alcatraz 2.0 “convicted murderers” had received sham trials in which, speculation had it, that the Attorney General was aware. These wrongfully convicted young adults—who some referred to as “super models,”—attracted larger audiences. The show was all about the ratings and money.

The clues as to who is blameworthy of these crimes are interspersed throughout the book. It was almost comical. It was like being on a “Name That Tune” show in which the melody was “Mary Had A Little Lamb.” Adding one note at a time, until every note is played in succession, and everyone is available to have that eureka moment in coming up with the correct answer.

Was subjecting a killer to a taste of his or her own medicine morally acceptable? On paper, sure. That was how the president had sold the country on his outsourcing of the criminal justice system.  (86)

Secretely, Dee thought it was dangerous to appeal to the most vulgar instincts of humanity, to normalize something as horrific as state-sponsored serial killers. But that’s what you got when a former reality TV star was elected president. (87)

One of the posts responding to the Alcatraz 2.0 show speculates whether or not the POTUS himself could be The Postman. (168) Another quips that “apparently, facts didn’t matter under this presidency.” (174) Another post suggests, “Do we hear “impeachment” anyone?” (362) The news is out that “Congress is going to start impeachment proceedings against the president.” (365)

Murdertrending closes with too many unanswered questions. Never fear, the sequel—Murderfunding—followed one day shy of a year later.

The sequel begins with a new cast of characters. After Becca is confronted by a girl suggesting that Becca’s recently deceased mom was none other than the Alcatraz 2.0 assassin Molly Mauler, Becca sets out to prove her mom was not a dastardly executioner. After all, her mom was a stay at home mom married to a female college professor. Becca is also a lesbian.

The House of Representatives have adopted six articles of impeachment against the president of the United States. Accused of high crimes and misdeameanors and treason, he has not resigned:

Instead, sequestering himself inside the West Wing like a child who refuses to accept punishment, the president stubbornly clings to what little power he retains. (Kindle edition: Location 56/4138)

Becca starts pondering how her deceased mother had always seemed so cheerful when her domestic life was so monotonous. On the other hand, her other mom has an exciting career, which is what Becca also desires.

But what if?  A teensy flutter of excitement erupted in Becca’s stomach . . . What if her mom hadn’t been as boring and vanilla as Becca had believed her to be? What if she’d been something more? Something exciting? Something dangerous?

. . . Just because there was a little part of Becca that almost kinda, sorta, maybe wanted Stef’s theory to be true, didn’t mean there was even an iota of probability that it actually was. 437/4138

“I wish my mom had been Molly Mauler,” Lars mused while he absentmindedly stretched his leg up behind him. “She had great style.” 2227/4138

Even if the executioners believed that their “prey” were convicted murderers, how could an ordinary, stay-at-home mom—or any of these executioners—participate in these killings? How could Becca’s mom, Ruth—aka Molly Mauler-- strategically plot out such horrific means of killing her victims?

. . . an incredibly disturbing one of the victim’s face close-up after the snake had strangled him---face purple, eyes frozen wide in terror and pain, lips parted in a now-silent scream.

Then the last photo of the snake, bloated after consuming its meal. The victim’s body was just a mound inside the reptile, and Ruth posed beside it, her face half in the frame, with a thumbs-up. The caption beneath the photo had been written in purple glitter pen.

Meanwhile, let’s see if some more clues will shed some light on the impeachment trial. Let’s see. The star witness against the president doesn’t show up for the hearing:

It’s an early Christmas present for the president.

Rumors have been flying as to the star witness’s whereabouts, including reports that he was seen leaving the Russian embassy just last week. Could this be another case of Mother Russia tinkering with our justice system? 1823/4138

His dead body is found behind a dumpster.

Analysts blame the recent market free fall on uncertainty shown by the current state of politics, and continued evidence of foreign meddling in the last election. 3227/4138

It was an article from the Washington, DC-based news website Beltway Bulletin tracing potential connections between the president of the United States and a Russian-based hospitality company called United Conglomerates. The contact between the two dated back to before the president was elected, when he was just a businessman and reality television star with enough ego to want to be president. 3590/4138

“If that’s true, . . . that means the Kremlin was funding alcatraz two-point-oh.”

Becca deduces that her dead mom’s missing scrapbooks would contain the evidence and figures out that they are probably hidden in her mom’s otherwise empty coffin. (Her mom had been cremated and her ashes were in an urn in the home safe.) Sure enough, there is a picture of her mom with not only the president, but also with the murdered witness and the Russian ambassador.

The president is removed from office and criminal charges are filed against him.

The upcoming criminal trial should be a reality show worthy of its defendant, but hey, at least he’s not president anymore. 4048/4138

In an interview with Rachel Fogle De Souza prior to the publication of Murdertrending, Gretchen McNeil commented:

I think with this book, I’ve been a little nervous because it is so over the top, and it’s touching on some current events that are a little explosive right now. But I’m hoping that people can see the social commentary of it, without feeling that they’re being preached at, because I don’t want to preach to people. I don’t think that this is the place for that, but I do hope that it makes people laugh and cringe, and also think a little bit. Because that really is the point of social satire.
[Ten’s Gretchen McNeil: How to Make Serial Killers Fun by Rachel Fogle De Souza, Booktrib, July 12, 2018]

Some books are a little more direct than Gretchen McNeil’s Murdertrending and Murderfunding.

How I Resist: Activism and Hope for a New Generation is:

Now, more than ever, young people are motivated to make a difference in a world they're bound to inherit. They're ready to stand up and be heard - but with much to shout about, where they do they begin? What can I do? How can I help?

How I Resist is the response, and a way to start the conversation. To show readers that they are not helpless, and that anyone can be the change.

How I Resist: Activism and Hope for a New Generation, is a collection of essays written by various people and edited by young adult author Maureen Johnson. This book was Johnson’s activist response to Trump winning the 2016 election. Young adult author, Malinda Lo, shared her thoughts:

Alex Gino, author of George, a book for middle-graders about a transgender boy, adds:

When the beast we call Trump was declared president elect, I felt the call for community anew.

The Trump administration is waging a war on freedom, equality, and the truth.

Lauren Duca is the woman who wrote “Donald Trump is Gaslighting America” as an op ed in the December 2016 issue of Teen Vogue. She also is infamous for her tweets after the death of Billy Graham. Referring to Graham, she tweeted, “. . . have fun in hell, bitch.”

Jennifer Weiner is the author of Good in Bed and other adult books, as well as The Littlest Bigfoot trilogy for middle graders. In her essay contribution to this book, Weiner writes about her daughter’s second grade persuasive writing paper assignment. Her daughter wrote:

I am writing for you to Come to your Senses and see what are you Doing to this country.”

She questioned his confidence that a wall would keep Mexicans out (“Haven’t you heard of planes?”) and argued against his hate for “Hispanics and Muslims.” “You may have convinced yourself but you have Not Convinced Me,” was how Phoebe ended her missive, which I proudly emailed to family and friends.

The morning after the election when Phoebe found out that Hillary had lost, Phoebe began to cry because one of her friends was adopted by two dads and the other friend was adopted from Ethiopia.

“Will Miriam’s dads still be allowed to be her parents? . . . Will Degitu’s parents have to send her back?”

. . . I realized that there were sixty-three million Americans who’d happily pulled the lever or pushed the button for a privileged, multiply-bankrupt, and twice-divorced reality television star who’d been caught on tape musing about grabbing women by the pussy.

Go to Amazon or Goodreads and search for children’s books about Trump. Start reading the reviews. Better yet, start reading some of these for yourself. Whether you are a President Trump supporter is not the question. The question that deserves serious consideration is whether or not vulnerable children are being politicized and manipulated.