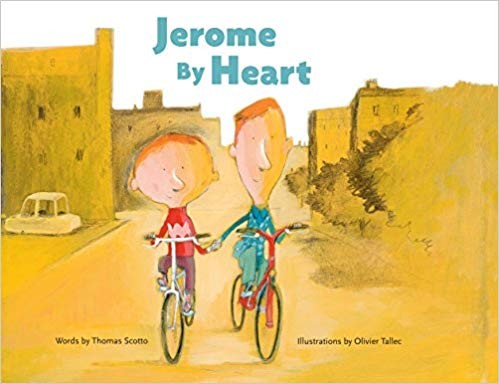 A school librarian brought the book, Jerome by Heart, to my attention. Originally published in France, this 28 page book with just 473 words, targets children from four to eight years. It was translated into English by Enchanted Lion Books and published in 2018.

Accelerated Reader describes this book in few words-- A young boy expresses his love for his friend, Jerome. The illustrations clearly demonstrate a huge contrast between the size of the two boys and those of the adults, signifying that these are indeed, young children.

Some children will see simply two very good friends, while others will see validation of feelings they may not know how to express, particularly if their parents are as hostile as Raphael's. Raphael gives them the language they need: ‘I say―yes. Raphael loves Jerome. I say it. It's easy.’ Subtle, joyous, affirming. ―STARRED REVIEW, Kirkus Reviews

The Enchanted Lion Books lists the awards Jerome by Heart has received:

On my local library online catalog, I read the information they listed under the “Subject” heading for Jerome by Heart.

Romance fiction? For children four to eight? It is not unusual for children of this age range to have best friends who are of the same sex. Will this cause young children to question whether they, too, are homosexual because they prefer friends of the same sex? Lest one believes that I am over-reaching on this one, remember that the library entry lists this book as Romance fiction. Without a doubt, those in the library field understand the true message of Jerome by Heart.

Let’s see how others address this book:

The book describes feelings children may not be able to express, including the hurtfulness of homophobia, and one child’s courage to be honest with his own feelings and loyal to a deserving friend. . . . —Susie Wilde, The News & Observer

In recent years here in the States, we’ve seen a small number of picture books with queer themes, but more often than not, it’s a picture book about parents who are gay. This sensitive and affirming story, like a beating heart laid bare, actually addresses the intense, devoted feelings of a child protagonist . . . —Julie Danielson, Kirkus Reviews

I have been waiting for a book like this and I worried I would never see one published. —Alec Chunn, The Stories Guy

Alec B. Chunn is a librarian in the Pacific Northwest. He holds joint masters degrees in library science and children's literature from Simmons College. Chunn wrote some articles on the website of the Association for Library Service for Children (ALSC) describing the American Library Association’s (ALA) 2017 Annual Conference. His June 23, 2017 blurb from his article reads:

Storytime Underground held its first ever guerilla preconference earlier today at the Harold Washington Library. The theme for the morning? Children’s librarianship is social justice work. And it can save the world. . . .

Chunn becomes convinced that, as a librarian, he should try doing a “social justice storytime” and recommends the “Storytime for Social Justice Kit.” The breakout group in which he participated, “tackled the question of how to build resources to support LGBTQIA+ communities at our libraries. . . .”

In his June 26th article, Chunn opines that, “to some, social justice” is a scary word. A radical word. So, I was heartened to see how many people showed up early Sunday morning to attend a panel titled “Libraries Are Not Neutral Spaces: Social Justice Advocacy in Librarianship:”

Karen Jensen, of Teen Librarian Toolbox (TLT), shared ways to promote social justice in libraries that, like hers, might be resistant to the idea. Without using any words or signs, for example, Jensen created a Black Lives Matter display by highlighting books about African Americans. She let the books speak for themselves—and they flew off the shelf!

The question was asked on the Storytime Underground Facebook about suggestions for activities to do centered around the Creepy Carrots and Creepy Underwear books. One librarian responded:

Several years ago my colleague purchased inexpensive “tighty whities” (child size) & had kids decorate for a Captain Underpants program. This could be adapted for a creepy underwear activity.

Are books such as Jerome by Heart tools that librarians must be sure to shelve to promote an LGBT or social justice agenda? Is that the role of librarians today?

I’m old enough to remember visiting the library countless times as a child for the single purpose of checking out books. Today, there are mini Lego cities, puzzles, games, toys, pajama nights, movie nights, crafts, Drag Queen Story Hours, Banned Book Week displays and activities such as getting a mugshot taken holding a “banned” book, eating allowed inside some libraries, music being played while trying to concentrate on choosing a book, story times for infants, Dungeons and Dragons clubs, reading to dogs, and the list of activities grows daily.

Libraries just aren’t what they used to be, but then again, neither are the children’s books.

You can listen to Jerome by Heart on YouTube:
www.youtube.com/watch?v=UCdvhRhTqeI&t=2s    5:39