IN THE LAND OF KIDBOOKVILLE 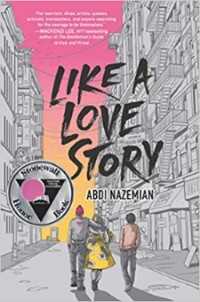 Like a Love Story was written by Abdi Nazemian, a “gay-iranian-dad-author-screenwriter-producer.” The book was published in June of 2019 and was selected as both a YALSA Top Ten 2020 Best Fiction for Young Adults and a Stonewall Honor Book.

YALSA is an acronym for the Young Adult Library Services Association, which is a Division of the American Library Association.

The American Library Association's Rainbow Round Table sponsors the Stonewall Book Awards. This award is described as, “the first and most enduring award for LGBTQIA+ books. . . . [these] books have been honored for exceptional merit relating to the gay/lesbian/ bisexual/transgender experience.”

Pet by Akwaeke Emezi and Like a Love Story by Abdi Nazemian were selected as 2020 Stonewall Honor Books in Children’s and Young Adult Literature. Both titles also made it to the YALSA Top Ten 2020 Best Fiction for Young Adults.

In Like a Love Story, Reza, an Iranian boy, “comes out” as a homosexual. He begins a sexual relationship with Art, a flamboyant homosexual who has wealthy, conservative parents. They both attend an expensive, private high school. It is the late ‘80s when many in the homosexual community are dying from AIDS.

The AIDS activist group ACT UP plays a significant role in this book. The AIDS Coalition to Unleash Power (ACT UP) began in New York City in the spring of 1987 at the Lesbian and Gay Community Services Center. Although the protests in the book are fictional, they parallel the historical protests that took place decades earlier. These took place at the New York Stock Exchange, St. Patrick’s Cathedral, and the National Institutes of Health.

Early in this story, Art gives Reza a Madonna CD. Reza tells him he cannot accept it.

“. . . I can easily steal another twenty bucks from my parents to replace it. My dad’s so easy to steal from. He just leaves his money in a money clip on the mantel when he showers.” (page 54, Kindle Edition)

Reza’s wealthy stepfather, Abbas, is kind to Reza and gives him an allowance. This was something his mother couldn’t afford to do when she was raising Reza and his sister by herself. In spite of Abbas’s kindness, less than forty pages later, Reza makes the decision to steal some money from him.

I don’t know why I do it.  . . . Back then, I never desired much that money could buy anyway.  . . . But now I want things. I think about things. Well, I think about one thing. Madonna.  . . . It is out of desire for her that I sneak into Abbas’s bedroom when he showers on Saturday.

. . . I remember Art saying how easy it is to steal from his father.  . . . I find his pants, hanging from a chair. A wallet in the right pocket weighs them down. . . . The shower is still on. He is still singing. I think about what I want to buy, and I reach my hand in.  . . . Then, in the pouch, I find bills. Three hundred sixty dollars .  . . . I wonder how much would make him notice. I decide fifty dollars is a good number, take it, and run out. Art was right. It’s easy. So is spending it. (pages 91-92 Kindle edition)

With the money, Reza buys 2 posters of Madonna and a T-shirt with a decal of Madonna’s face on it.

I have every magazine Madonna is on the cover of, and every record, and more posters. I have amassed a collection, funded by my allowance and supplemented by the money I have made a habit of stealing from Abbas’s pocket when he showers. (pages 184-185)

Towards the latter part of this book, Abbas comes into Reza’s room to tell him that his mom and sister are running a few minutes late. The whole family is getting ready to go to a memorial service for Stephen, who has just died from AIDS.

Abbas tells him that he first thought it was his own son, Saadi.

“But then I noticed the things you were buying and I knew it was you.”

He shakes his head. “I knew you wouldn’t do it forever. And I knew that you needed these things. These records and posters. If you were spending the money on something unhealthy, I would have stopped you.”

Art’s parents are conservatives and aren’t supportive of his lifestyle. After his parents see him on the news after the New York Stock Exchange protest, his dad offers him a deal. He says he will write a check for $10,000 to an AIDS charity of Art’s choice if he will stay away from the protests and from Stephen, Art’s mentor, who is dying with AIDS. Art agrees.

. . . The relief that washes over my mom’s face makes me feel sick for a moment, because I have no intention of keeping my end of the bargain. I’ll just wait for the check to ACT UP to clear before doing anything risky again. Then it’ll be too late for them to cancel the payment. I avoid looking at my mother. I tell myself that I’m Madonna, and my parents are Pepsi. I’m the badass b#tch here. Did Madonna also feel guilty when she took their money?

[Earlier in the story, Art tells Reza about Madonna.]

Madonna did a Pepsi commercial to that song, and a few days later she released the video to the song, where she dances in front of burning crosses and kisses a black saint. Pepsi told her to pull the video. She said f@#k you. So . . . they pulled the commercial, and she kept the five million. That’s what you call a badass b#tch move. Do what you want and keep the money. (pages 52-53 Kindle Edition)

But deceiving them was the only choice. I couldn’t say no to that donation . . . For the first time in my life, I know what being gay is all about. It’s not about the wet dreams, or the jerking off, or the ability to impersonate your diva of choice. . . . It’s about whatever the hell I was feeling when I really saw Reza for the first time. It’s about love. How can I not keep fighting for that? (pages 70-71 Kindle edition)

In June of each year, Art, Reza, and Judy (their heterosexual friend and a main character in the book), meet in New York City on the anniversary of Stephen’s death. When the friends meet for the twenty-six year anniversary, Art has HIV, and Reza is living in Connecticut with his husband and children.

Stealing is okay when the money is used for things you need—such as Madonna posters and records.

It’s also okay to steal from someone who deserves it.