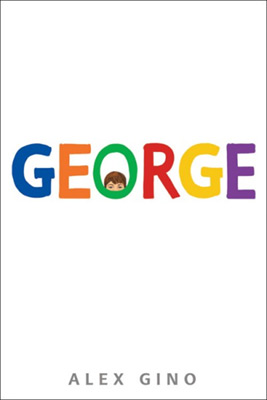 It’s good to know that children’s library books aren’t written purely for entertainment purposes. There’s so much a child needs to know, and schools just don’t have time to teach everything. Perhaps the schools have taught this, but the kids just didn’t understand the subject as thoroughly as necessary. Library books can be used to fill these learning gaps. How could children possibly become college and career ready—or even prepared for junior high school—without the knowledge and understanding of hormone therapy?

George, by Alex Gino, was published in 2015 for a target audience of children eight to twelve years old. George, a ten year old in the fourth grade, had seen a television interview with a transgender woman:

So George knew it could be done. A boy could become a girl. She had since read on the Internet that you could take girl hormones that would change your body, and you could get a bunch of different surgeries if you wanted them and had the money. This was called transitioning. You could even start before you were eighteen with pills called androgen blockers that stopped the boy hormones already inside you from turning your body into a man’s. But for that, you needed your parents’ permission. (p. 47)

That parental permission can sometimes be quite troublesome. Anyway, it’s always helpful to have another ten year old that you can talk to. George’s friend Kelly tells him:

“So you’re, like, transgender or something? . . . I was reading on the Internet, and there are lots of people like you. Did you know you can take hormones so that your body, you know, doesn’t go all manlike?” (p. 104)

Certainly this is a topic that ten-year-old children are in-the-know about. George is still concerned about that vexing little part about parental permission. Kelly responds: 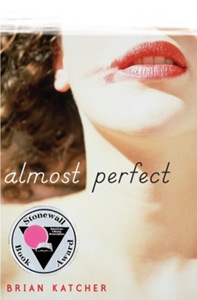 Almost Perfect, by Brian Katcher, was the winner of the first Stonewall Award for Children’s & Young Adult Literature. Sage answers Logan’s question about how she developed like she did.

“I take synthetic estrogen. Hormones, Logan.”
. . . “Like medicine? You actually grew those things?”
. . . “I started when I was fourteen. It took a few years, but I’m happy with the results. . . .
. . . “I always thought you just wore a padded bra or something.” Men didn’t have breasts, not in my experience.
“You never wondered why I don’t have a beard? You never noticed how soft my skin is?” . . .
“Of course I noticed, but I just thought you were girly. I guess I never knew you could change someone’s body like that.” . . . Pills could turn a guy into a chick?
. . . “Only if you start before puberty’s over. That’s another reason I transitioned early. If you started taking hormones now, you wouldn’t get nearly the results. Your breasts would stay small and pointy, and you wouldn’t lose your facial hair. Your, ah, other parts wouldn’t wither up as much, either.”
. . . “So you just go up to the pharmacy and order this stuff?”
“. . . I wish. It’s a catch-twenty-two situation for transgendered people. Hormones have to be prescribed by a psychiatrist, and most therapists won’t let you start until you’re in your mid-twenties. By then they won’t do you nearly as much good.”
. . . “So how did you get these?J"
“I order them from Mexico. My grandfather left me a few thousand dollars, and my parents were foolish enough to put it in an account with my name on it. . . .(pp. 206-207)

Almost Perfect was published in 2009 for young adults. It’s reassuring to know that it’s only written on a fourth grade, fifth month reading level, so that younger kids can read this. After all, if they don’t read this book until they are in high school, they may not learn how important it is to start hormone therapy early, and may not be able to get the desired results from the hormone blockers and hormones. 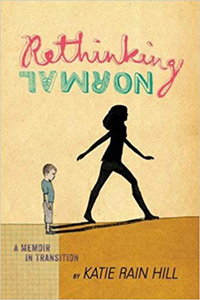 In the second chapter of Katie Rain Hill’s, Rethinking Normal, she is beginning college. Rain Hill explains that she “had been taking female hormones and living as a girl for about three years” and had gender reassignment surgery four months before beginning college.

When she was a senior is high school, Rain Hill had already been “taking hormones to halt any male puberty and to feminize my features . . .” (pp. 6, 15)

Rain Hill read an article about Jazz Jennings that led to other articles:

I read about hormone replacement therapies and surgeries, people who had actually managed to transition from one gender to the other. (p. 88)

Rain Hill then watched an Oprah show where Oprah interviewed a MTF (Male to Female) transgender.

I couldn’t believe it. All this time, there was actually something I could do. (p. 88)

Dr. Arrowsmith explained the hormone therapy to Rain Hill’s mom and explained that not everyone takes insurance, but he could recommend some doctors:

“Many trans women start taking female hormones—in either pill or shot form—to help change their bodies to look more feminine . . . [i]t’s a serious medical decision, which is why if Katie does take hormones, she should be under the supervision of a doctor.” (p. 116)

She also sent me home with my first round of hormones: estrogen by injection, and spironolactone pills. The estrogen was to soften my skin, lengthen my hair, redeposit fat in a female manner, and aid breast growth. . . . The spironolactone was to inhibit androgen (male hormones) production. I would need to take estrogen for the rest of my life. The spironolactone was necessary only as long as my testes were producing androgens, so if and when I had surgery that removed my testicles, I could then stop taking spironolactone.

. . . Dr. Haas had explained that hormones change each person’s body uniquely and at different paces. I hoped they worked on my body quickly. (pp. 118-119) 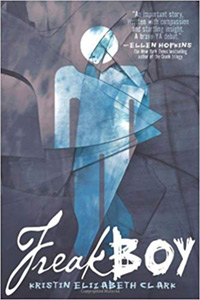 In Freakboy, by Kristin Elizabeth Clark, Angel is a MTF transgender. Angel writes:

Hormones cost money . . . they mean the difference between coarse hair, man-bodies and smooth skin, girl-curves. The girls I know who take ‘em illegally can’t count on a steady supply of this remedy that reveals their true selves . . . and they live with the fear of running out. Me, too, once upon a time. (p. 153; actual text is written in free verse) 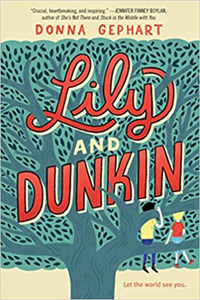 Lily and Dunkin, by Donna Gephart, is listed for children ages ten and up. Accelerated Reader lists this 2016 book for grades six and up. The book begins with Tim, an eighth grader, who later begins transitioning into Lily. Tim tells his father that he needs to talk to him:

Tim/Lily goes to the library to research hormone blockers to find out the right time to begin taking them.

There’s something called Tanner Stage II. That’s when my boy parts start growing, when hair starts growing down there, when all the things I don’t want to happen start happening. That’s when I’m supposed to start the hormone blockers. That means I should be starting them now. (p. 35)

Mom tells Dad that they have to get the hormone blockers for Tim/Lily and Dad objects to this:

[Mom] “Gary, if Lily becomes more boy-like, it’ll be the worst thing that could happen to her. I think it would kill her. And I don’t give a flying fig how much they cost. Lily needs them.” (p. 49)

Lily is thinking about hormone therapy and how to convince her dad to let her take hormone blockers.

I’ll need to take estrogen hormones if I want my body to make boobs someday. But before I can do that, I need hormone blockers to stop my body from betraying me and developing male characteristics. I’ve got to make Dad understand how important the blockers are, how they can buy me time before permanent, irreversible changes take place. (p. 70)

Will he let me get hormone blockers before it’s too late? Will he ever love the real me? (p. 96)

If only I could get started on hormone blockers, I know I’d feel better about myself. (p. 122)

Dad and Mom take Tim/Lily to the therapist.

“Your mother told me that your father would rather you didn’t get them. How will you feel when you grow hair on your face and around your penis, when your voice deepens and your shoulders broaden?”

. . . “Lily, why do you think your father doesn’t want you to get the hormone blockers?”

Dr. Klemme tells Lily to sit in the waiting room with her mother. Her father is the one she needs to talk to.

I believe there may be some things about what’s going on with you that your father may not fully understand or appreciate yet.” (p. 163)

When they leave the doctor’s office, they have the prescription for the hormone blockers. Later in the book, Lily finds out what the doctor said to her dad to change his mind:

“The doctor said something that completely upended the way I thought about everything. . . . She showed me a statistic. Forty-three percent of transgender kids try to kill themselves.” . . . Then she said, ‘Would you rather have a dead son or a live daughter?’”

Now the family drives to the endoctrinologist’s office. Dad says that they need to give them the letter inside the envelope. The endocrinologist requires a letter from a psychologist or therapist before prescribing hormone blockers. Dad signs the permission form.

Dad questions whether or not she is sure about taking the hormones. “Because they’re expensive.” (p. 176)

Someday, I tell myself, I’ll be able to move on to female hormones. Then I’ll finally . . . get the body that matches who I am—more curves, fewer angles. (p. 202)

Lily goes for the first injection from the endoctrinologist. The doctor tells her that tiredness is a possible side effect. The shot doesn’t hurt.

The only one who looks like she’s in pain from the whole thing is Mom when she goes up to the counter to pay for my shot. Hormone blockers are expensive. (p. 216)

Discussion questions are included at the end of Lily and Dunkin’. One such question is: “Why is it best that she begin the hormone therapy now?” (p. 337)

I’m pretty sure the kids will be able to answer that question.