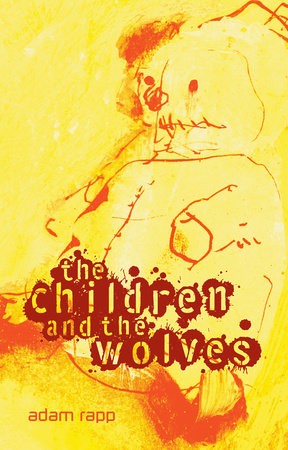 Another downloadable book from my WV READS library site, is Adam Rapp’s The Children and the Wolves. Accelerated Reader lists this book for 9th to 12th graders, and it is written at a fourth grade, second month reading level. Amazon has this available as a free Audible Audio Book with an Audible Trial.

If there were book awards given to authors for writing seriously disturbing books, Adam Rapp would surely be a top contender. In the opening chapter of Rapp’s, The Children and the Wolves, there is a dead bird in the kitchen. “It looked like someone busted it open and flinged it at the stove. You could see its heart and stomach meats. It was next to the stove for a few days and the bugs were all over it. It was scientific to watch. Flies and ants and a little white worm wiggling into its heart.”

His mom puts it in the trash and Wiggins, thirteen, takes it to the dumpster. While at the dumpster, Wiggins pulls its head off. “It was easier than I thought . . .”

Orange’s mom had cancer and had to have one of her breasts removed. Later, she left Orange and his father. When Wiggin’s asks him if he knows where she might be, he responds, “Who cares . . . F@#king one-titted freak.”

Bounce, a fourteen-year-old rich girl and genius, is the ring leader. Wiggins and Orange are her followers who do what she suggests. They are both thirteen.

“Frog” is not yet four years old. She is kidnapped by the aforementioned three kids. Since Orange’s father is in a wheelchair and cannot go down to the basement, they keep Frog down there. They feed her cereal and chewable vitamins. Frog plays a video game called The Children and the Wolves. “She’s really good at it even though she’s not four yet.” (9) They keep her chained up, so she has very little room to move around. She loses a baby tooth and Wiggins puts a quarter under her pillow.

One of the most disturbing lines is when Frog tells Orange that, “I’ll let you punish me if you give me a cupcake.” She requests “chocolate with blue sprinkles.” Orange responds, “What about one with nuts?” What exactly is Orange's statement implying? Since Frog has a potentially fatal nut allergy, this suggests sexual abuse, murder, or a not-so-funny private joke.

Wiggins reflects that the vibration from the washer-dryer unit can make him get his “nut off” if he presses up against it. “I only do that when the frog is asleep. You can’t get your nut off in front of a little kid. That’s how your soul gets a hole in it. That’s what I think even though Bounce says we don’t got souls.” (9)

The young teens kidnap her in May and now it is July. There is no mention of her crying for her family or any normal responses. It’s as if Rapp wants to depict this toddler as being as twisted and detached as the other three main characters.

The security guard at Best Buy gives Orange one of the copy machines because “I let him do me.” (15) The kids make posters and flyers of the Frog, so they can go around the neighborhood and collect donations.

In her honors English class, a local poet comes to speak to the class. Bounce clashes with him. In this same chapter, the reader learns that Bounce detests a girl in her class who plays the piano and is never late for class. “I’m going to put an end to her piano playing. I have a plan that involves a popular carpentry tool used for driving nails.” (40) According to this chapter, it was that particular night that she decided to kidnap Frog. She has also decided to get rid of the poet.

Going house to house with their flyers, they are earning money supposedly to help find the missing little girl. In reality, they are earning enough money to buy a Glock to kill the poet. At one house they go to, an old man lets them in, feeds them, and gives them twenty dollars for the cause. In return, one boy steals his salt and pepper shakers, and the other boy jerks off in his bathroom and then steals his medication. When they leave, they slit the tires of his Cadillac.

In another scene, a woman, Takada Flowers, from Children’s Services comes to check on Orange. He slams the door in her face. Later, as Bounce and Orange are driving to the hardware store, they spot her car. They waited and followed her home and copied down her address. Then they returned to the hardware store and bought a hammer and some pliers. The pliers were originally intended for the girl piano player in her class. “She’d just gotten accepted into some special music school . . . and Bounce wanted to break her hands before she left. But that all changed after Takada Flowers came by.” (121)

The next night they returned to Takada Flowers’s apartment. Bounce hits her “hard, like three times, one with the claw part of the hammer, and then Takada Flowers went quiet and the blood started mixing with the milk (from the groceries she was carrying into her apartment). Orange takes the pliers and “started pulling on her gold nigger tooth.” (124) She doesn’t die.

Wiggins actually stabs Orange in the leg with the screwdriver while Orange is extracting the tooth. The next day Wiggins frees Frog and takes her to the poet’s house, as he understands he will take care of her and get her back to her family. He then visits Takada Flowers in the hospital. Her father just thinks that Wiggins is one of the boys she has cared for her in her job. Wiggins learns that she will probably be blind and maybe deaf, also.

In the end, Wiggins walks into the woods. The last scene mentions that he took out his knife and opened the blade. It is unclear as to whether or not he committed suicide, or was just running away.

Is this book plausible? Frog is still three years old, and yet she exits a ballet class by herself and is coaxed into a Lexus driven by a fourteen year old. Is it common for a three year old to lose a baby tooth . . . to play a sophisticated and horrifically disturbing video game for hours on end, to seemingly be calm and matter of fact, rather than crying incessantly for her family—not to mention, not being scared to death since she is alone the majority of the time and sleeps on the basement floor? If the drugs were numbing her emotions, wouldn’t they also cause her to be ineffective in the video game?

Why did Orange have to let the Best Buy guy “do him” so they could get a copy machine and print flyers? Bounce seemed to have endless money available to her. Would her pharmaceutical sales wealthy parents really just leave Oxycontin and other drugs readily available for Bounce to access and distribute freely to her two “chuckleheads?”

Would her unattentive, gone-most-of-the-time parents really not notice all the extra mileage on their “one-hundred-and-eleven-thousand-dollar-car?” (26) And no one notices Bounce driving the Lexus--or exiting the driver's side at the various stops she makes?

Where did the seemingly already mutilated bird in Wiggins’s kitchen come from?

How did the kids know who to go to to buy poison to kill the poet’s dog? (Wiggins didn’t actually give it to him, but threw the package of Alpo-laced burgers upon the roof.) How did they know just who would order the Glock for them?

How did Bounce write such a disturbing essay answer on an application to the Kent School and still get accepted there?

How did she escape being thrown out of her honors class when she was so disrespectful to the poet? Why was she allowed to continue her banter with the poet?

Why did no one notice these children? Is that the author’s societal indictment here? The Rapp books I have read seem to have the same dark themes. Are his fictional characters crying out for help, or is it really Adam Rapp, himself?

The Children and the Wolves is also a 2012 Booklist Editors' Choice: Books for Youth.

Committed to providing a broad selection of outstanding books that mixes popular appeal with literary excellence, the Books for Youth editorial staff has chosen the titles . . . as best-of-the-year fiction, nonfiction, and picture books.

The Kirkus review describes: “Though the slim novel’s premise is profoundly unsettling, Rapp’s poetic use of language makes for a brutally beautiful read.”

Accelerated Reader includes nine of Adam Rapp’s book on their site. Passing the online quiz for The Children and the Wolves will earn a student four points. “Nigger” is used 17 times, and variations of the f-word (38), sh#t (39), d#mn (2), and b@tch (9) times.

Are these the only types of manuscripts being submitted to publishers these days, or are those publishers specifically looking for this kind of material?

Parents should have much higher expectations. They should let those publishers know just that--with their voices and their pocketbooks.