Coming Soon to a Library Near You

The chart below is a table of twenty-six books that have been, or will be, released in the near future. The titles are hyperlinked to enable you to look these books up on Amazon.

Four of these books were released earlier this month. Since the other twenty-two books are not yet available to read in their entirety, parents, teachers, bookstore owners, and librarians know little about these books other than the information given. (Some of these people were given Advanced copies to read, of course.)

I will give some additional information about some of these books following the chart.

Unless otherwise noted, all quotations are taken from the Amazon descriptions of these books.

Learn all about LGBTQ+ activism, from gender-neutral bathrooms to legalizing same-sex marriage. Get a global look at the history of the movement, meet the activists involved, and celebrate some of the legal victories! Each chapters end with a call to action, so kids can feel inspired to get involved in their own communities. This high-interest book is written at a lower reading level for struggling readers.

This book was released on August 17, 2021. Look at the picture below. Notice where the pictures stop. Biden could not be added unless his predecessor was first listed. 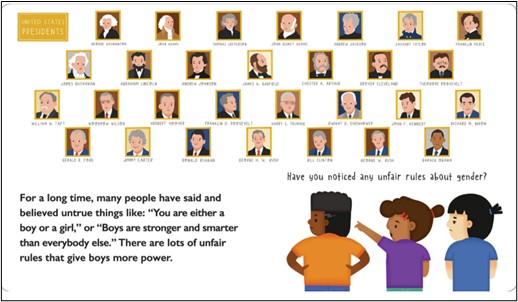 4) I Need a New Butt!, I Broke My Butt!, My Butt is So NOISY!: 3 Hilarious Stories in one NOISY Book  now with an interactive sound button that will keep preschoolers and kids—and grown-ups, too—giggling from the first page to the last. Notice the "Press Here" button that produces the "interactive sound." 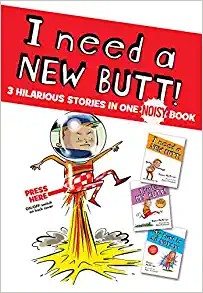 6) The book, My Sister, Daisy, closes with "A Note from the Author."

Just before my daughter turned six, while reading a bedtime story, she told me she was a girl. This was surprising as I had always assumed her to be my son. The book we were reading discussed gender identity and the gender spectrum--how the idea of boy versus girl doesn't work for everyone--and mentioned that the gender people are assigned at birth might not match who they are inside. But it is up to each person to determine and share their own identity.

My daughter told me that was her--she was a girl inside.

You know Megan Rapinoe as an international soccer superstar! She’s also a fierce activist, boldly speaking out about issues of equality and justice—from LGBTQ rights to the equal pay movement to Black Lives Matter.

In this adaptation for middle school readers of her memoir One Life, get to know Megan: from her childhood in a small California town where she learned to play soccer and how to fight for social justice; through high school, college and beyond; to 2016 when she became the first high-profile white athlete to take a knee in support of Colin Kaepernik, and also suing the United States Soccer Federation along with her teammates over gender discrimination.

With every yoga pose, each breath in, and each breath out, My Heart Flies Open brings young readers home to themselves: they are life, love, joy, and kindness; bold, fierce, peaceful, and whole. Written for children, and especially girls of color, ages 4 - 8.

a mother, counselor, writer, artist, mindfulness teacher, kid's yoga teacher, Reiki Master, and fifth generation Vision Keeper. She is a SEED Diversity trainer and gives talks on mindfulness, indigenous wisdom, and their power to create peace in our world, communities, and school systems. Achikeobi-Lewis is the co-founder of YeyeOsun: The Institute of Sacred Balance and has worked for Asheville City public and charter schools, Winthrop College community counseling clinic, and Catawba Mental Health.

When a unicorn poops, magical things happen! Unicorn poop smells like cupcake frosting and even can grant wishes.

Find out everything there is to know in this book about unicorn poop and the magical things that happen! Features a rainbow-colored, glittered, soft touch-and-feel unicorn poop that is visible through the die-cut cover and on every interior spread. 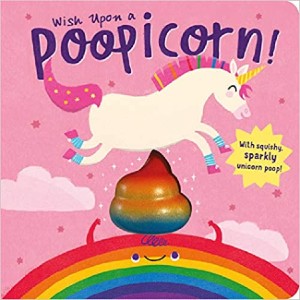 21)  Although Theodor Geisel (Dr. Seuss) has been dead for almost three decades, books and other items displaying ‘The Cat in the Hat’ are still highly marketable. The Cat on the Mat: All About Mindfulness, a part of the Cat in the Hat's Learning Library, is no exception.

“It's called mindfulness meditation, and in this simple, rhymed Cat in the Hat's Learning Library Book, he shows kids how to slow down and still their bodies and minds through simple breathing exercises and focused concentration.”

Six of Geisel's books are no longer being published since they have been deemed racist. The Cat is still acceptable--at least for now. I think it has something to do with the Cha-Ching Factor.

But when Meena makes a mess, her grandfather is there to teach her how to handle it with deep breaths and meditative poses―after all, he has a hurly-burly hullabaloo too.

There isn’t much information about this upcoming release. From the above description, it is interesting that Grandfather has to teach Meena breathing and meditative poses as a result of her running, doing cartwheels, and making noise.

23) This Is Our Rainbow: 16 Stories of Her, Him, Them, and Us is “the first LGBTQA+ anthology for middle-graders.” The editor of this book, Nicole Melleby, “lives with her wife and their cat.”

A boyband fandom becomes a conduit to coming out. A former bully becomes a first-kiss prospect. One nonbinary kid searches for an inclusive athletic community after quitting gymnastics. Another nonbinary kid, who happens to be a pirate, makes a wish that comes true--but not how they thought it would. A tween girl navigates a crush on her friend's mom. A young witch turns herself into a puppy to win over a new neighbor. A trans girl empowers her online bestie to come out.

A tween girl navigates a crush on her friend's mom? This LGBTQA+ anthology is for children from eight to twelve.

24) The author of She He, They and Me!, Cassandra Jules Corrigan, is described as a genderqueer writer.

Through illustrated scenarios and explanations, it gently encourages children to learn pronoun etiquette and educates them on they/them pronouns, trans and non-binary identities, misgendering and neo-pronouns such as xe, zir and hir.

This illustrated book also includes a dedicated section at the back for adults, which includes a pronoun table, photocopiable pronoun labels and sample letters addressed to schools.

As I have often noted in previous articles, preschool books aim to change the values, attitudes, and beliefs of adults, as well as those of the very young.

25) Ben Katzner, author of Hello, My Name is Poop, is a comedian. There is a youtube video—"Wonderbound: Let’s Talk Poop!" in which Rebecca Taylor, the managing editor for Wonderbound, discusses where the idea for this book originated.

Surprisingly, the idea came from the Wonderbound editor-in-chief! He had “made a joke . . . about how even as adults, we all still laugh when we say the word, ‘poop,’ and kids in particular laugh when they hear the word, ‘poop.’ We said that one of the best ways to get a kid to pick up a book would just be to call it ‘poop.’  . . . We came up with this idea to have a book called poop and with the kind of general idea, we sort of kicked around internally and then we went to you, Ben, and we said, ‘Hey, we want to do this book about poop. Here’s the kind of general idea that we were thinking and we asked you . . . what would you do with a book like this . . . You kind of pitched us back this incredible idea and these incredible characters and a totally incredible take and that’s where the book kind of started.”

Hello, My name is Poop! is a book about bullying. This is a link to a Ben Katzner stand-up comedy act.

26) In this book by JR and Vanessa Ford, Calvin appears to be very young. The descriptions do not designate whether Calvin will be beginning preschool, kindergarten, or elementary school. He just “knows” that he is a boy, even though the world recognizes her as a girl. After making this declaration to his parents, they are quick to take him shopping for a new wardrobe.
The authors of Calvin, “are nationally-known advocates for LGBTQ+ rights, specifically, rights for transgender youth.” They are raising a transgender child. Jeanette Jennings, the mother of Jazz Jennings, praises the book—“[it] provides a comforting tool for any child who may be nervous about presenting their true selves to the world that surrounds them.”

Myriad books are published each month. This is just a small sampling of the available choices. Book reviews and descriptions are not always reliable.
When choosing books for your children, it is important to look Between the Covers.

Deborah DeGroff
whatsinsidechildrensbooks.com
Between the Covers: What's Inside a Children's Book?