Brave Girl: Clara and the Shirtwaist Makers’ Strike of 1909 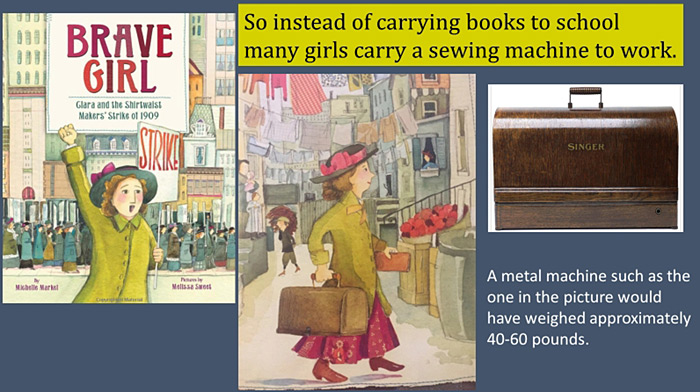 Brave Girl: Clara and the Shirtwaist Makers’ Strike of 1909 is intended for a four- to nine-year-old audience. The beginning of the book shows Clara and her parents immigrating into New York. Clara, like thousands of other immigrants goes to work in a garment factory. This author’s choice of words in the following line is worthy of consideration.

So instead of carrying books to school many girls carry a sewing machine to work. [my emphasis]

On another page, there is a picture of over two hundred factory workers who are seated and sewing on uniform sewing machines. Industrial sewing machines were in common usage in garment factories at that time. They were generally mounted, which would have cut down on the amount of vibration and allow for more stability. Imagine hundreds of garment workers arriving to work each day setting up their individual machines and packing them up at the end of the day. Just picture those “girls”  trudging through the New York City snowy winter streets carrying these cumbersome machines to work. This “girl”–Clara Lemlich—was already seventeen years old when she arrived in this country. She was twenty-three at the time of the 1909 Shirt Waist Makers’ Strike.

The author uses the term, girls, referring to the garment workers, fifteen times. The word women or ladies was used only six times referring to the workers and two additional times in reference to the women who were supporting the striking workers. Yes, there were girls as young as twelve who did work in these factories; they were not the majority. The average age of the workers was between sixteen and twenty-five.

Historically, in this time period, most only had an eighth grade education, so most of the workers would not have been in school regardless. The first junior high school wasn’t even established until 1909. This is a link to an eighth grade examination in 1895:

Note that these were not multiple choice questions; the students were expected to have a bona fide understanding of the various subjects.

At lunch they share stories and secrets as if they were in school where they belong.

Since Clara was seventeen when she came to this country and twenty-three at the time of the 1909 strike, why does the author take such pains to imply that these workers—including Clara—were mere children carrying a weighty sewing machine to work each day, rather than schoolbooks? The target audience for this book is easily influenced children ages four to nine.

Few would disagree that the conditions in most of the garment factories were abysmal. That is not the subject of this blog. Clara Lemlich was a real woman who started “the largest walkout of women workers in U.S. history.”

Although some background information is included at the back of this book, the author fails to mention that Clara Lemlich joined the Communist Party in 1926. Her son, Irving Charles Velson, was also an active member of the Communist Party. His Communist activities are mentioned in the Venona Papers. The Venona project, was an American government effort from 1943–1980 that attempted to decrypt coded messages by intelligence forces of the Soviet Union.

The police arrest her seventeen times. They break six of her ribs.

I am not going to argue this point, as I do not know whether this happened or not. I do know that the book is marketed to children ages four to nine, however. I also know that most picture books for this age group are read and re-read to children. What message will be imprinted in the minds of the children?

You can listen to this book being read in its entirety on YouTube. As you watch this, ask yourself why Clara is portrayed as being younger than her true age? Do the young readers (or listeners) believe that they should be fighting social justice issues at their respective ages? This seems to be a pervasive theme currently.

Please take note that neither of the people reading this book to the YouTube audience read any background information written in the back of the Brave Girl book.

Are these types of books teaching history to our young children, or could this be considered indoctrination or exploitation? You decide.

[Brave Girl: Clara and the Shirtwaist Makers’ Strike of 1909 by Michelle Markel, Balzer + Bray (an imprint of HarperCollins), 2013]